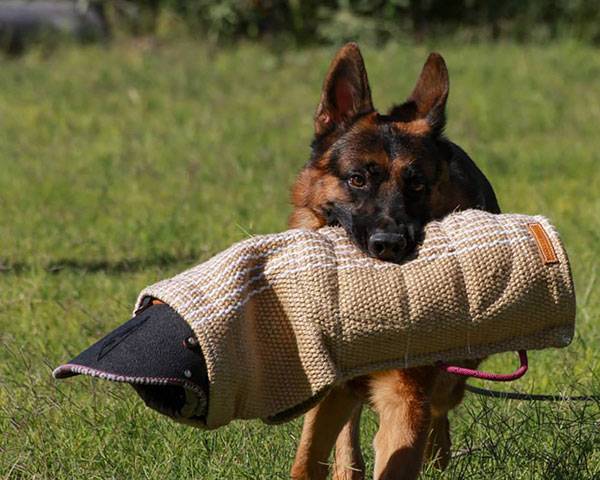 The sport of Schutzhund, developed in the late 19th century, is the German term for protection dog.  German Cavalry Captain, Max von Stephanitz originally developed Schutzhund to determine the breeding quality of the German Shepherd Dog.  Schutzhund trained dogs are basically performing the same tasks as a highly trained police K9. The dogs undergo a thorough examination of their skills in three different phases.

Before a dog is allowed to participate in a SchH1 examination, the dog must pass an extensive temperament evaluation by a licensed judge. This temperament test is called the “Begleithundeprüfung” (BH), which is German for “Traffic Sure Companion Dog Test”.

The dog must demonstrate basic on and off leash obedience.  Sureness around strange people, strange dogs, traffic (cars, bicycles, pedestrians, joggers, etc.) and loud noises is also required. Only dogs that possess a stable temperament and do not display any aggression or fear pass the examination and receive the BH title.

A dog must have successfully completed the BH examination in order to advance to a Schutzhund title.

The dog tracks on a 33 foot leash with the handler following the dog at the end of the leash. The dog can also track off leash. However, the handler must still maintain a distance of 33 feet.

The difficulty, length, number of articles, and the age of the track increase from SchH1 to SchH3.

The obedience part of the Schutzhund test is performed on a large field.

The dogs work in pairs. One dog performs the exercises, while the other dog is put in a down stay (long down under distraction) on the side of the field.

All of the exercises are performed off leash and include a series of heeling patterns. The dog also has to heel closely in and around a group of moving people. During the free heeling two gunshots are fired to make sure the dog does not show any negative reactions to loud noises.

The heeling is followed by a number of motion exercises.  Here the dog must sit, lie down or stand upon command.  A good recall must also be demonstrated from various positions.

Furthermore, the dog is required to retrieve dumbbells of various weights on the flat ground, over a one-meter hurdle, and a six foot scaling wall.

Finally, the dog has to run in a straight direction away from the handler, upon receiving the command “voraus” (German for “go ahead”) and lie down immediately upon receiving a second verbal command.

This phase is a test of the dog’s willingness to serve his handler.  It also tests his temperament, and structural soundness. Again, the number of exercises and the degree of difficulty increase from SchH1 to SchH3.

In the protection phase, the dog’s courage, strength, and physical fitness are tested.

The handler must be in control of the dog at all times.

Phase C begins with the search for the helper.  The dog must search a number of hiding places in order to find a person acting as decoy. The decoy is the judge’s assistant during the protection phase and wears a protective suit as well as a heavily patted sleeve on one arm. Once the dog has located the decoy, the dog is to bark and guard that person closely until the handler approaches. When the decoy is making an attempt to escape, the dog is expected to pursue the “bad guy” by biting the padded sleeve and holding the grip firmly.

The protection phase consists of a series of exercises that are very similar to police work.

Throughout all of the exercises the dog must show enthusiasm for the work, courage, and the temperament to obey the handler. Dogs that display fear, a lack of control or inappropriate aggression will be dismissed.

Observing the performance of a highly skilled SchH3 team is a beautiful example of the partnership that can exist between human and dog.

Please complete our form or give us a call at 480-525-5525 to find out additional information or to schedule an appointment.